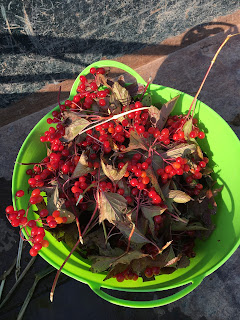 Highbush Cranberry is known by many names. The scientific name is Viburnum trilobum. It is also known as Guelder Rose, Crampbark, American Cranberry, Moosberry, and locally here in Maine - Maple Leaf Viburnum. In my house, we call it Stinky Sock Berries - more on that in a minute. It is delicious and a very good or even better berry than Lingonberry, or traditional cranberry.

The berries have a distinctive musk aroma. This is especially pronounced when cooking them. It is so strong, you may want to do the cooking outside. How could something that smells like soccer socks taste good? It is a bit of a mystery to me to be honest. After sweetening processing into jelly, the flavor is fabulous and a bit earthy. No doubt it is there and that's probably one of the reasons they are so good. 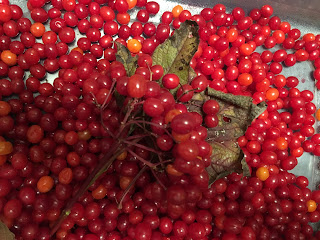 What is the earthyness, in the flavor world? Umami. The fifth taste. Salty, sweet, bitter, sour are familiar, umami is not as well known. That deep, dark, meaty intensity that distinguishes seared beef, soy sauce, blue cheese, ripe tomato, Parmesan cheese, anchovies, and mushrooms, among other things. It hits the back of your throat and leaves you craving more. That's umami which translated to english as "deliciousness". The chemical responsible is glutamic acid and it was identified in the early 20th century by a Japanese chemist. So American Cranberries have it and that's a good thing.

Mix berries in a saucepan with sugar. I used 8 cups of berries and 5 cups sugar. Gently heat and stir until the sugar dissolves. You can adjust this to your tastes. Continue cooking and stirring frequently until the sauce is a good consistency and the berries are well cooked and mixture has just reached a rolling boil. You may add a little citrus zest or any spices you like, but only a very small amount of liquid, as this will only extend the cooking time. Add a package of pectin - powder or liquid is fine. 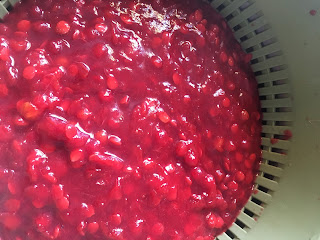 Strain by pressing through a sieve. If you are lucky enough to still have a cone and wooden pestle food mill, use that. Discard seeds and skins. 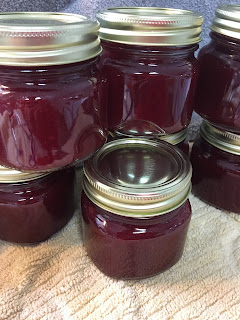 American Cranberry jelly has a delicious cranberry flavor and the umami isn't pronounced after cooking but does give it a bit of an earthy flavor. It might not be the best for toast (neither is cranberry sauce) but try it with turkey, pastured chicken, pork, or your favorite moose meatloaf.
Can't find it in the wild? Plants are available at www.jiovi.com in the spring or at our farm until the snow flies. https://www.facebook.com/liveanewway/ 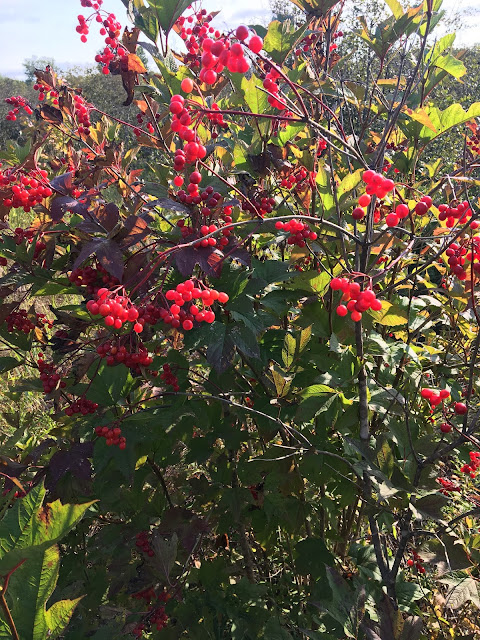